I was going to start weeding through the main flower patch which is mostly pot marigolds Flighty’s favourites but decided that there were more weeds than flowers.  I then spent much of the week clearing the area, forking it over, then hoeing before hand weeding and sowing lots more seeds.  Thankfully it wasn’t as hard as I thought it was going to be, and hopefully it will have been worth doing.   There are pot marigolds elsewhere on the plot and they’ve started flowering. 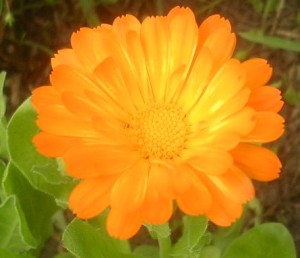 I checked through the potatoes for weeds, and was surprised to see some plants already flowering, and the strawberries are now laden with developing fruit. 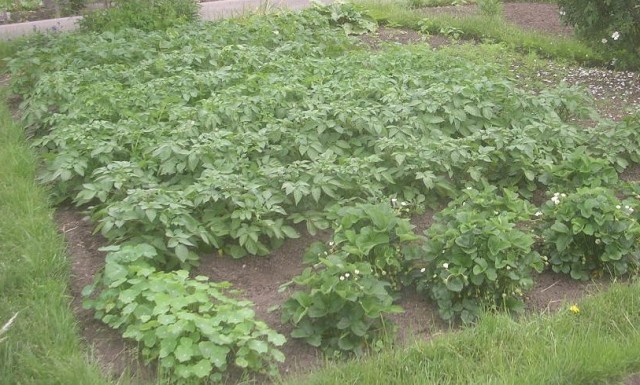 The climbing French beans are growing well, so I sowed a second lot yesterday.  This is the variety Algarve which which is already beginning to curl up the cane.

The short row of dwarf ones Borlotto Tintoretto are also doing well, unlike the other variety Martini none of which have appeared.  I’ve sowed some more in the  hope they do rather better.

It was long time online friend, and fellow blogger, Nikki’s birthday yesterday so I hope that she had a lovely day.  She’s a keen rose grower and has lots in her garden over in Southern California, where it’s much drier and hotter than it is here.  I always think of her when I look at my Pretty Lady, which has is now providing a wonderful floriferous display. 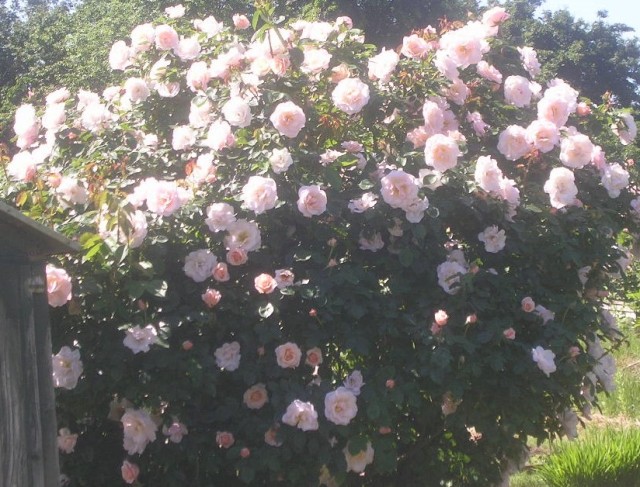 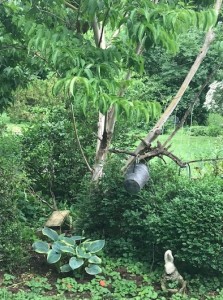 Liz – these pictures of the Seven-Sons tree in my back garden, here in Lexington, Kentucky, were taken last week just before torrential rain started.

Because the blossom appears later in the year there’s been little apparent change since last month apart from it getting leafier.

The picture below also shows my Zephirine Drouhin thornless climbing rose that I thought I’d lost.

The yellow discolouration on the bark is of note, as are the marks which look like scaring or scoring. 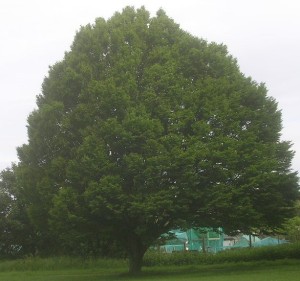 Mike – Over the course of the past couple of months the Hornbeam in the local park has gone from looking golden-yellow to bright green and is now much darker, as seen  here.

The branches are only visible from close-to and  underneath as the fully grown leaves now cover the the tree.

Our thanks to Pat, The Squirrelbasket, for hosting tree following, and if you want to see what it’s all about, and perhaps join in, please  have a look at this tree following post. 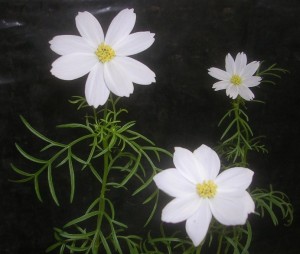 I’ll be doing a windowsill post later this month but wanted to mention and show the cosmos which have been flowering for at least the past couple of weeks.

There are five Sonata White in 3″/7.5 cm square pots which are all about 6″/15 cm tall and are flowering at the moment so I won’t be taking them to the plot to plant out just yet.  This photo was taken last weekend.

Another three, slightly shorter plants I’ve repotted into a 5″/12.5 cm round pot, which I’ll be keeping on the windowsill, have at least six buds showing on them.

I’ve been delighted with these flowers, but find it slightly bemusing that they’ve done so well indoors and already had to dead-head some of them. 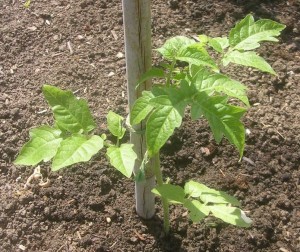 the most of the sunny, warm weather this week.  Early on Monday I rough cut the three inner grass paths and since then I’ve been planting and sowing.  Most of the plants I started off at home have been now been planted out.  I know that they often look a bit sorry for themselves for a day or two but I’ve been surprised how good everything is looking so far.  As well as planting out cosmos, sunflowers and tomatoes (shown is a Golden Sunrise),  I’ve also sown dwarf cosmos and snapdragons.

The rose Pretty Lady is starting to flower profusely and looking through the various photos I’ve taken so far I like this one.

This morning I was delighted to see a Common Blue butterfly and a bright red and black Cinnebar moth fluttering around.  The poached egg plant flowers have been buzzing with bees and I’ve spotted a few  ladybirds.

I’ve now put the climbing bean canes up and sown the first lot of French beans, and  also sown two short rows of dwarf  ones.

The past couple of years I’ve bought sweet corn plants at the horticultural society plant sale but  this year I’m sowing seeds direct instead.  I’ve sown a block of nine with the variety Incredible, then once they’re showing and growing I’ll sow another block of nine.

Most of the various plants I had at home I’ve now taken to the plot and will plant out during the week.  I’ll also be sowing lots of flower seeds.  This morning I rough cut all round the outer grass paths, and will do the three inner ones through the week.

The rose Pretty Lady is late flowering this year but I think it will start in a day or two.  It surprises me to see how red the petals are in bud but open up pink. 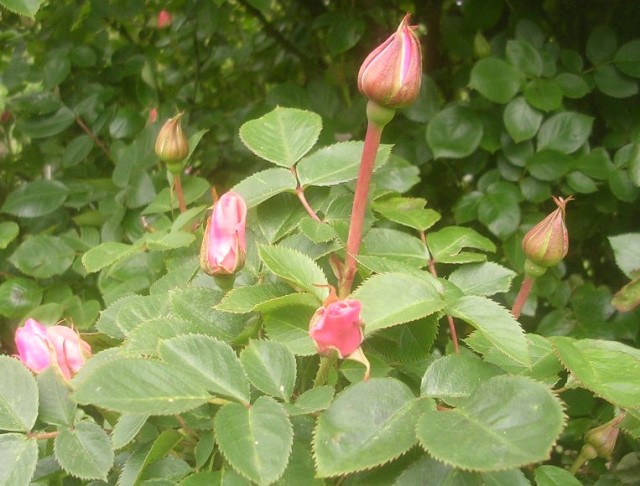 I’ve now been doing this blog for 14 years and this is the 1599th post.  All the pictures of mine that I’ve shown here have been taken with the same camera, a Nikon Coolpix 3200 I bought in 2004.   My thanks to everyone who stops by to read my posts, and look at the pictures, and especially to those of you who also comment.

Take care, and have a good week.

I looked at the Met. Office local weather forecast through the weekend and into next week.  It’s looking calmer, drier, sunnier and warmer with daytime temperatures over 20C/68 F and at night around 10 C/50 F.  At long last I’ll be taking the various plants I have at home to the plot to harden off then plant out.  I’ll also be sowing  the flower and vegetable seeds.

There must have been quite a lot of rain overnight last Sunday as Monday morning I found that the bottom south-west corner of the plot under a couple of inches of water.

Thankfully it had drained away in a day or two,  and most of the ground has been okay  to hoe and weed. 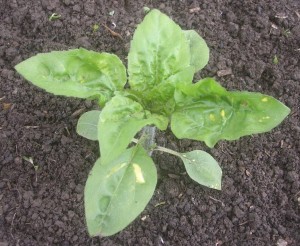 Among the numerous self-seeded flowers is this sunflower in the middle of where I grow most of the cosmos.  I’ll leave it be, and it’ll be interesting to see if it’s a knee-high Music Box or one of the taller ones I grew last year.

It’ll be good to get back to plotting regularly again, instead of mostly pondering and pottering, and hopefully catch up with all that now needs doing.

couple of days of wet and windy weather, especially on Friday,  so this morning’s visit was  to look round,  chat with a couple of plot neighbours then home before it started raining.

Here are some of the more unusual poached egg plant flowers, the white variety Meringue. 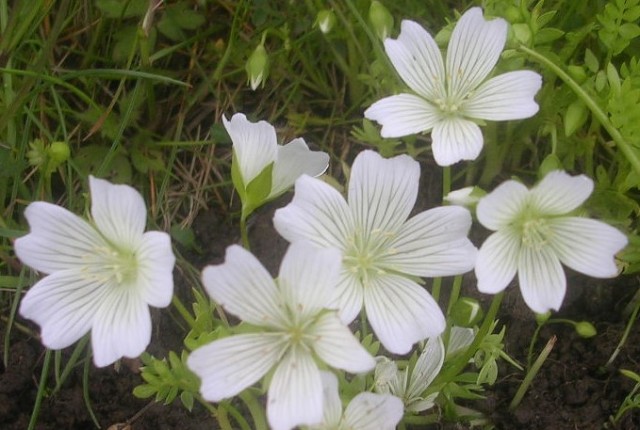 I’m still waiting to plant and sow both flowers and vegetables, and hopefully will be able to make a start from mid-week onwards providing the weather forecast is right and it’s calmer, drier and warmer.

Still on the windowsill at home are the cosmos, sunflowers and tomatoes I want to move to the plot to harden off then plant out.

The cosmos couldn’t wait and most of them have started flowering like this Sonata White, which is 5 in/12 cm tall with a  1 in/2.5 cm dia flower.

and evening there was heavy rain for several hours so it wasn’t surprising to see much of the allotment site water-logged on Monday morning.  Thankfully the plot was okay, but soggy in a few places.  Since then there’s been more rain, but nowhere near as heavy.  Despite all that I spent Tuesday morning and today hoeing and weeding the three vegetable patches, mostly from the grass paths which as you see need rough cutting again once they’re dried out.

This is the view looking north towards the roadway taken this morning.  The cornus, dog rose and rose Pretty Lady are now all in full leaf, and it won’t be long before the latter starts flowering.

The next few days look like being wet and very windy at times, gusting to over 40 mph,  so it looks like any further plotting will have to wait until next week.

to the plot over the past few days was on Friday morning as it’s been mostly damp and dull, with heavy rain at times. 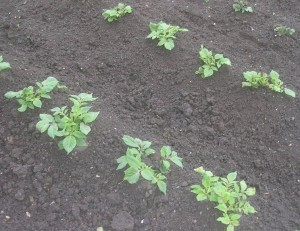 Nearly all the potatoes are now showing and I’ve already earthed up the first earlies Pentland Javelin a couple of times.

I’ll be keeping a close eye on the weather forecast and if there’s the slightest  likelihood of any frost overnight I’ll be covering them.

The strawberry plants are doing really well, and have plenty of flowers on them, mostly partly hidden by the leaves. 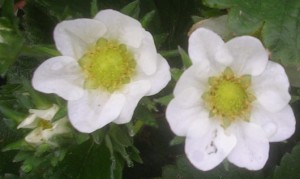 I’m glad that I didn’t pull up and compost all the poached egg plants (limnanthes douglasii) a few weeks ago, as I thought about doing and mentioned here, as the ones I left are now flowering!

I’m pleased to see that there are also some of the all white variety Meringue which has smaller flowers.  I’ll try to get a photo next time I’m there. 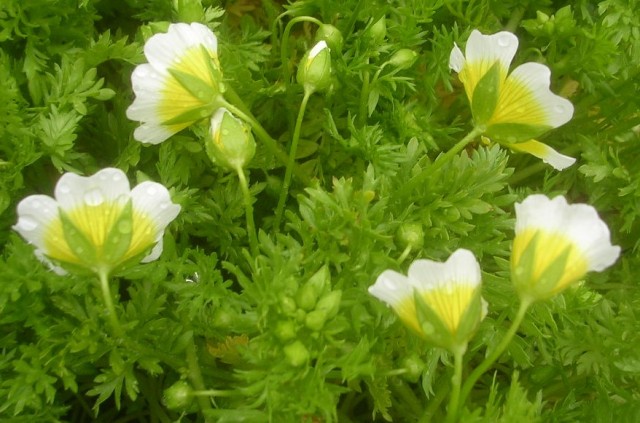 With plenty of rain and warmer weather everything is growing well, including the weeds so I’ll be doing plenty of hoeing and weeding next week once it’s drier.  I also hope to make a start on sowing various flower and vegetable seeds.

Liz – Here in Lexington, Kentucky the Seven-sons tree in my back garden looks to have recovered from the hard pruning it had earlier in the year,  which I mentioned last month.  Lots of new leaves have appeared which I hope means that there’ll be plenty of blossom in late summer.  There is also new growth where a branch was cut off. 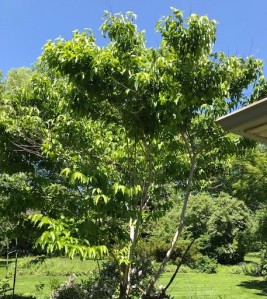 Mike – Just a couple of photos from me this month to show how green the Hornbeam  in the park now looks compared to last month thanks to the fresh green leaves.

Our thanks to Pat, The Squirrelbasket, for hosting tree following, and if you want to see what it’s all about, and perhaps join in, please have a look at this tree following post.