There was a lot of heavy rain overnight on Wednesday so I wasn’t surprised to find that the plot was soggy the next morning, and there was water logging around the site.

Despite that I’ve been clearing up fallen leaves and weeding, and I also dug up the remaining sunflowers, with the stems going under the blackberry bush with the sweet corn stems.

Today is just another Sunday although I am a year older, but I don’t  celebrate it nowadays.  I spent the morning on the plot enjoying the sunshine, chatting with the robin and watching the bees on the white asters Twinkling Stars which are as good as they’ve ever been. 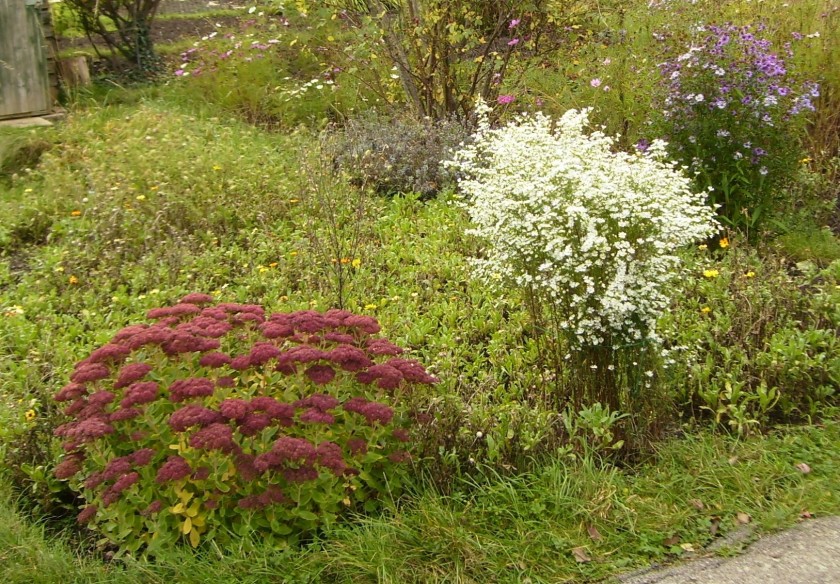 I pulled up the sweet corn plants as they’re now finished and found one last edible cob I’d missed.  I stripped the leaves, cut them up then added to the compost heap. I’ve put the stems out the way under the blackberry bush until I decide what to do with them.

In recent winters I’ve been digging out and sieving compost from the nearby communal wood chip bays but unfortunately they’ve been empty for over a year.   What I’ll do instead this year is empty the compost from my compost heap rather than wait until the spring.  I’ll just fill a barrow load on days when the weather is okay.  Rather than spread it all over the vegetable patches I’ll put it on the areas where I’ll be growing climbing beans, carrots, sweet corn and tomatoes first then use the rest as and where needed. 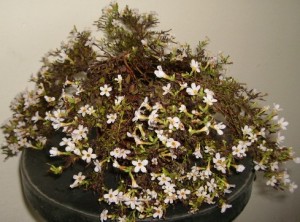 My thanks to Nikki for identifying last Sunday’s mystery plant as a Bacopa (Sutera cordata).

It’s probably the variety Snowflake, and is a tender perennial so I’ve bought it home to overwinter before the first frosts arrive.

plotting every morning except yesterday when it was damp and dull.  At this time of year that’s a real bonus as there’s still plenty to do.

This morning I cut down the climbing bean plants and added them to the compost heap.  I was pleased to find enough small beans for a couple of dinners.  I then pulled up the bamboo canes, cleaned them and put them away.  I weeded the area then roughly forked it over.  Needless to say the robin was around finding plenty of eat. 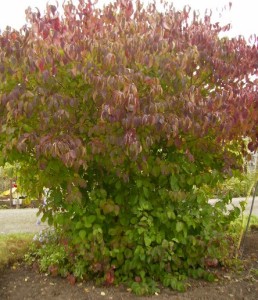 The cornus/dogwood is now showing its autumn colours with the green leaves turning brownish-red prior to dropping.

When they do I will collect them to add to the compost heap. 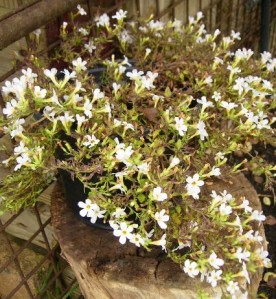 This morning I was given this flowering plant but the person who gave it to me doesn’t know what it is, and nor do I!

This coming week looks rather more unsettled with some rain, and feeling cooler later in the week. 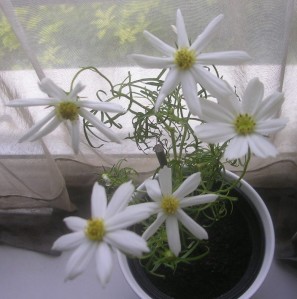 There is now just one of the three cosmos Sonata White plants still budding and flowering.

This picture was taken earlier in the month and as of today has four each buds and flowers, but very little foliage. 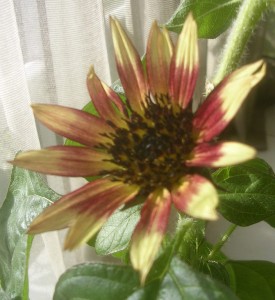 The second small flower on the sunflower Musicbox had opened by mid September and lasted  a couple of weeks.

Sadly since then this plant has finished, with all the leaves having died back.

I’ve previously mentioned that I’ve been looking for an alternative pot marigold to grow instead of the Oopsy Daisy.  I’ve decided to try Fruit Twist, a dwarf  variety which only grows to around 6 in/15 cm.  The picture on the seed packet and this webpage shows both orange and yellow flowers, all with light coloured centres.

Next year I’m also going to try Candytuft Fairy Mixed Colours which only grows to around 8 in/20 cm on the plot, and maybe some Cornflowers Polka Dot which are a few inches taller.

Among a few 5 in/12.5 cm pots I’ve recently acquired to use is an old terracotta one in remarkably good condition.  I’ve not yet decided which of the above I’ll be growing in it.

It’s been fun growing plot flowers like this and I hope to do even better next year. Please note that there probably won’t be any more On the windowsill posts until next March.

or Asters if you prefer, are wonderful colourful flowers which have probably done so well this year as they don’t enjoy dry weather in late summer or early autumn. 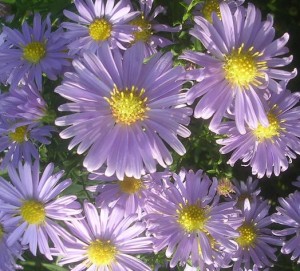 I have a large clump of blue ones growing between the cornus (dogwood) and the roadway which started out as a few in a large pot, which I was given when I first took on the plot. 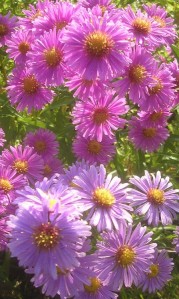 Last year I dug up a few small ones growing on a plot that has been untended for a couple of years and replanted them in a group on the plot.  They’ve done really well,  with two distinct varieties as shown by the different colours.

I didn’t expect them to grow as tall as they have and are really in the wrong place so I’ll probably move them next spring.  I may also separate them into two colour groups.  Of the two I prefer the pink ones as shown below. 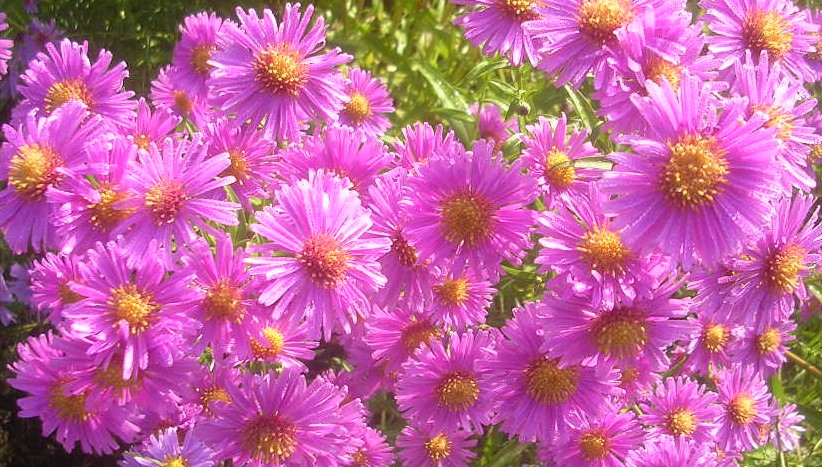 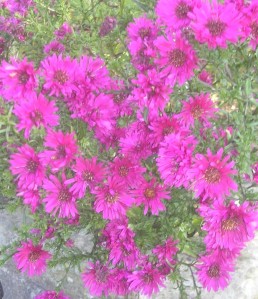 The red one in the stone feature is a mass of flowers, whilst the white Twinkling Stars is starting to flower. 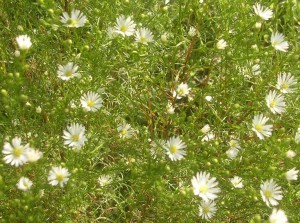 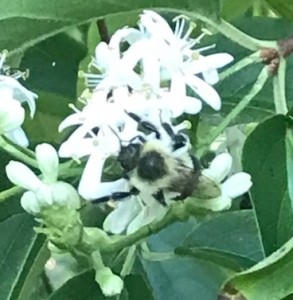 Liz – There was a lot of heavy rain during September here in Lexington, Kentucky.

That bought down most of the white blossom on the Seven-son flower tree in my garden, which the bees had been enjoying.

However October is when this tree really shines as the gorgeous pink sepals then show, which is such a lovely sight. 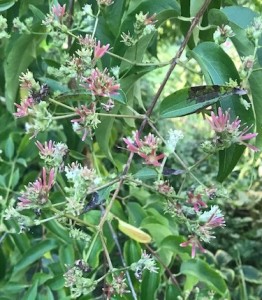 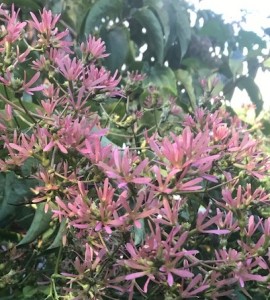 Mike – There’s still little visible change to the Hornbeam in the local park apart from a few  leaves now completely yellow and the branches ever more spotted with patches of green lichen.  Walking under the tree canopy and round it shows just how short the main trunk is before it separates into numerous branches as they head upwards. 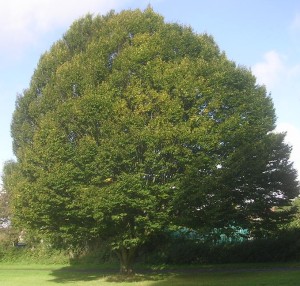 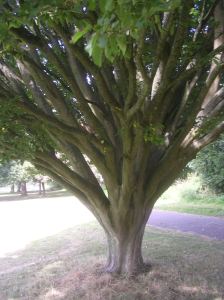 Our thanks to Pat, The Squirrelbasket, for hosting tree following, and if you want to see what it’s all about, and perhaps join in, please have a look at this tree following post.

blackberries and raspberries during the  week, both of which did well this year.  I lost some raspberry plants earlier in the year so I was surprised how many berries I got from the remaining plants.  My plot neighbour Fran is going to dig up some of her unwanted ones in a week or two and give them to me to plant.

A month on and I’m still picking sweet corn cobs, with the last few still to come.  Thankfully the squirrels(?) only nibbled a couple of them. 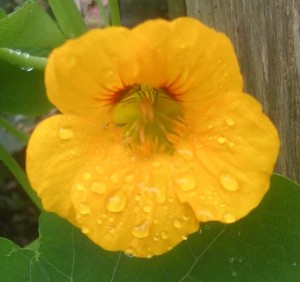 Yesterday’s heavy rain and  high wind took it’s toll on most of the flowers, especially the cosmos and nasturtiums and they’re now mostly looking rather sorry for themselves.

This yellow nasturtium was still okay being tucked away by the compost heap.

There are still plenty of pot marigolds to be seen around the plot, like these which are one of my favourite colour variations. 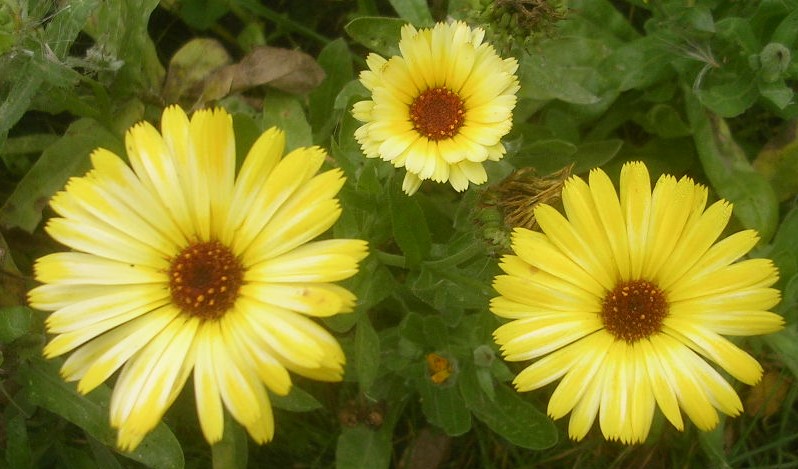 I’ve done another guest blog post for Gardening with Disabilities Trust,  the charity I support, which was published last Friday.  As you’ll see if  you click on the link it’s all about the cosmos and sunflower I grew in pots on the windowsill this year.

and plenty of rain this week I’ve had a couple of good mornings on the plot.

I planted out the white meadowsweet I was given earlier in the year, which  had been in a large container.  It flowered in July, as seen here, and is now starting to shed it’s leaves so it’s been replanted in the south-east corner, where the old metal dustbin used to be, and hopefully it will flourish. 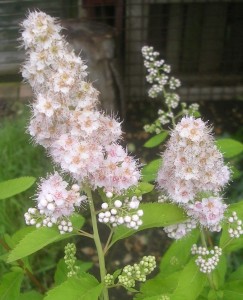 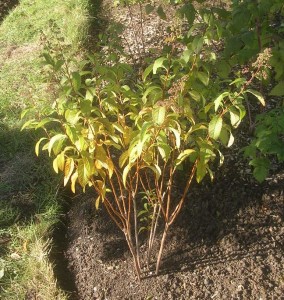 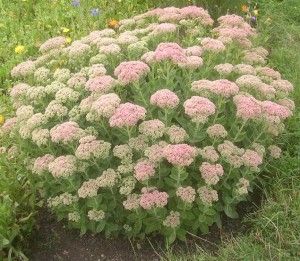 The sedum flowers have deepened in colour during the past few weeks.

The picture on the right shows them at the beginning of the month, and the one below a few days ago. 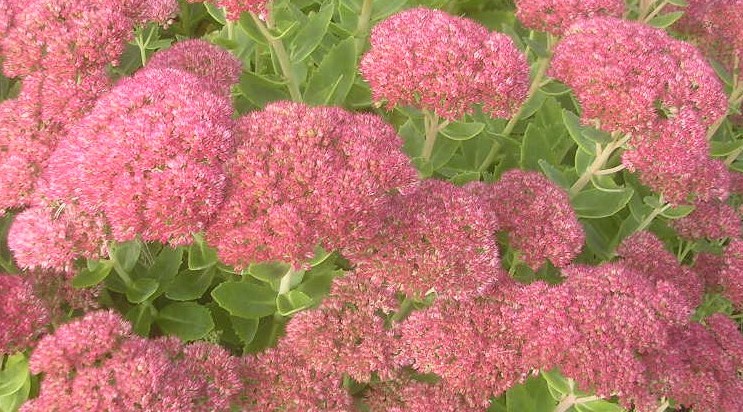 climbing French beans Algarve, which are a flat podded variety.  Even when they’re over 10 in/25 cm long and 1 in/2.5 cm wide they are totally stringless.  Cut into small lengths they’re still good to cook and eat, which is more than can be said for runner beans that size. 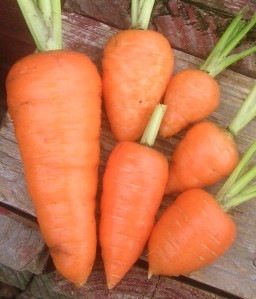 The carrots Chantenay Red Cored are also proving to be excellent, although small with the size varying from about 1 in/2.5 cm to over 4 in/10 cm in length.

As you see they’re nice and clean, and can be cut and cooked without peeling.

I’ll definitely be growing both these again next year. 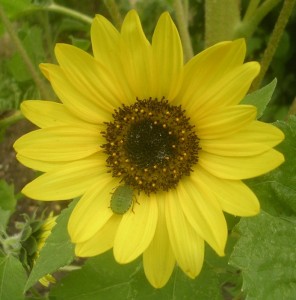 It’s usually bees, and occasionally butterflies, I see on the sunflowers  so it made a change to see this Green Shieldbug  during the week.

This is one of the numerous, fairly small, flowers on the self-seeded tall sunflower. 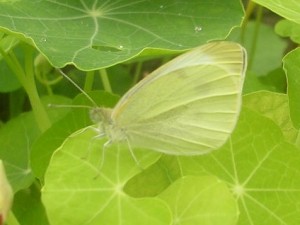 Talking of butterflies it was unusual to see this white one on the nasturtiums. 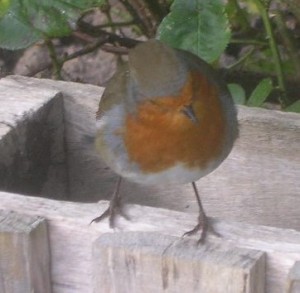 I haven’t even unlocked the shed door when the robin appears and then generally stays around until I come home.

It’s certainly the friendliest one for a long time, here it’s the other side of the compost heap little more than arm’s length away watching what I’m doing.

It’s been mostly dry, sunny and reasonably warm since Monday and there have been bees buzzing all round the cosmos, nasturtiums and sunflowers. 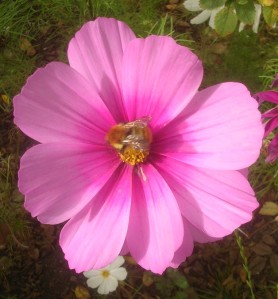 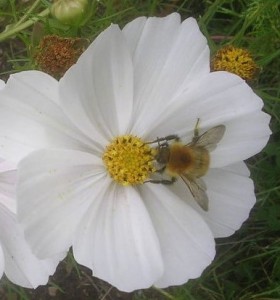 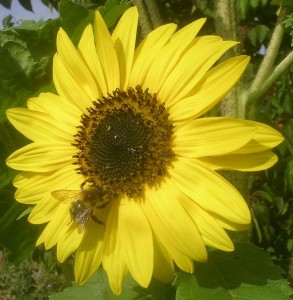 I’ve mostly been pottering harvesting some French climbing beans, carrots and sweet corn cobs along with picking the last of the blackberries and strawberries whilst thinking what about needs doing, such as cutting the grass all round the path edges for the last time this year hopefully.