I usually go to the plot most mornings but Tuesday, although dry and sunny, I didn’t as I went to my local pharmacy for a  Covid booster vaccination.  Thankfully, like the two previous ones and the flu jab, I didn’t suffer any side effects.  I then did some shopping before heading home for a welcome cup of tea and couple of biscuits.  After an early lunch I decided to take a look round the allotments.  I’m glad I did as I met Trevor who has a plot at the other end of the site to mine.  He was just packing up and going to take his dog Ranger for a walk in the local park so I joined him.  We walked all round rather than just through it, and was pleased to see a heron partly hidden in the reeds.  We also spotted some wild pansies, which are a  really lovely little flower.  All in all it was a most enjoyable hour or so.

The weather has been better this week but noticeably colder with frosts on Tuesday and yesterday mornings so I wasn’t surprised that had finished off the cosmos and nasturtiums, which I’ve since been pulling up then adding to the compost heap. 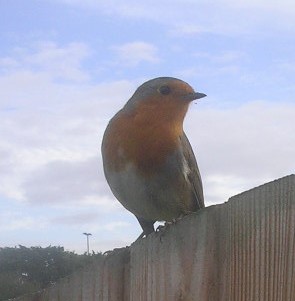 My apologies for the lack of pictures, which is  due to a couple of reasons which I won’t go into now.  This picture of the robin perched on the top of the shed door was taken last month.