The three cosmos Sonata White have now been flowering continuously for over three months and there has been as many as ten flowers at one time.

The larger flowers are over 2″/ 5 cm across and on long stems whilst the small ones, less than 1″/2.5 cm, have  mostly nestled on the top of the foliage. 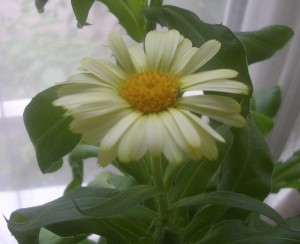 The pot marigold Oopsy Daisy has grown much too tall and is now approaching 24″/60 cm. Since the initial three flowers there have only been two more despite dead-heading and pinching out.

Next year I think that I’ll try a different variety,  perhaps Candyman Orange, to see if I get a shorter, compact plant with more flowers.

Yesterday I received some pot marigold Winter Sun seeds some of which I’ll be sowing this month in a container on the plot to flower from late autumn onwards. I’ll also be sowing one or two in small pots to keep at home on the windowsill to hopefully give some colour when we head into winter.

The sunflower Music Box is now almost 12″/ 30 cm tall and the single flower bud is getting bigger.

Even if the flower doesn’t come to much this has been a compact, pleasing plant .

Unfortunately a couple of weeks ago I dropped the tomato plant and broke the stem in a couple of places. It had grown much too tall and there wasn’t any fruit forming so I wasn’t too dismayed.  I won’t bother trying again next year and will grow more flowers instead.